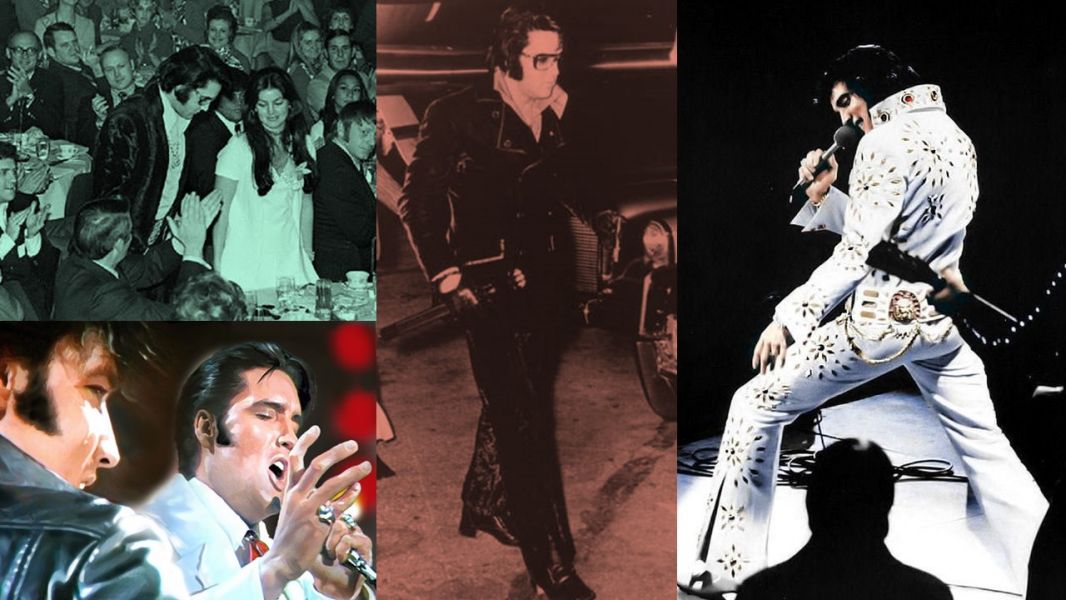 Elvis Presley had just turned 36-years-old eight days before he found himself almost lifeless from fright as he stood in the wings about to go up to the stage. He looked down and noticed his hands were shaking and then he began perspiring profusely. The man next to him was not a member of the Memphis Mafia, a personal entourage that served as his supportive work staff and team of friends.

“I’m scared to death,” he expressed to the man, Frank C. Taylor, who reminded the performer that he had appeared hundreds of times to crowds much larger than the two thousand gathered.

He wasn’t there to sing. After all, Elvis had just flown in from singing in Las Vegas the previous night just to settle into the top floor of the Rivermount Hotel so he could be nearby for this exceptional event. It was January 16, 1971 and Elvis was at the Memphis Municipal Auditorium to accept an award as one of “The Ten Most Young Outstanding Men in the Nation.” He had to give a speech.

“It was a different plateau for him,” Taylor, the Chairman of the event for the Jaycees, told the Memphis Press-Scimitar later. “For the first time, he was being paced on the level with achievers in realms other than entertainment, and for the first time Elvis felt he was being accepted like a true professional. He liked the association of being given such an honor along with those nine other guys, and he was impressed by their tremendous abilities. And none of the others singled Elvis out for adulation more than any other, and he liked that too.”

When Elvis’ turn came, he took his place at the podium and looked back at the other winners seated on stage. With a sweeping gesture, he said: ‘These men may be the Kingdom of God.’”

The famous voice cracked, he could not go on.

“‘He was the only one to have genuine tears in his eyes and to break up,’ Taylor observed.

Elvis stopped, stepped back for a second, regrouped himself and spoke again.

Then the famous singer began to speak, incorporating a favorite Roy Hamilton Rhythm and Blues tune, “Without a Song.”

“When I was a child, ladies and gentlemen, I was a dreamer. I read comic books, and I was the hero of the comic book. I saw movies, and I was the hero in the movie. So every dream I ever dreamed has come true a hundred times. These gentlemen over there, these are the type who care, are dedicated. You realize if it’s not possible that they might be building the Kingdom, it’s not far-fetched from reality. I learned very early in life that: ‘Without a song, the day would never end; without a song, a man ain’t got a friend; without a song, the road would never bend, without a song.’”

Elvis paused with tears in his eyes, saying humbly, “So I keep singing my song. Goodnight. Thank you.”

The superstar walked off the stage with the Jaycee Award, what he often referred to as his most valued achievement. The honor was so significant to him, that Elvis went to great lengths to make certain he could be there in person and labored weeks over his now famous speech. Elvis considered those words to be among his most valuable quotes.

Ron Ziegler, who was a fellow recipient that night in the National Affairs category, said Elvis was “very pleased to receive the award, and it was an honor to him, and he so indicated, he was expressing a little discomfort of how he was going to react and to relate to the other people who were there. So we talked about that a little bit. It appeared to me at that time that he wanted to reach out and talk to someone different to that what he could find in his entourage. I didn’t get the impression that he was limited or dull witted, I found him to be somewhat articulate and poised individual, I did sense however an individual who was withdrawn and an individual who was somewhat shy.”

Elvis was not comfortable giving speeches. Although his most famous words are “Thank ya. Thank ya very much,” it’s a difficult task choose his finest quotes. When selecting the five best for AXS Entertainment, it became clear that some of his utmost profound and eloquent messages came from Elvis’s humblest quotations. Although almost 40 years have passed since his death on August 16, 1977, Elvis still remains in the hearts and minds of millions of fans worldwide.

The following quotes, deemed among the five best of Elvis Presley, offer valuable insight into the beliefs of the greatest entertainer in history.

“People ask me where I got my singing style. I didn’t copy my style from anybody.”

One of the biggest mistakes people have made since the beginning of his career was to label, pigeonhole, or even try to brand Elvis. He was too big for anything the world had ever dealt with to be able to do that.

Although deemed the King of Rock n’ Roll, the fact is Elvis’s contributions go far beyond that genre and even further than just music. He not only pioneered, engineered and premiered in Country, R&B, Gospel, Blues, and Rock, Elvis evolved, revolved, and was involved in fashion, movies, entertainment, merchandising (Teddy bears and guitars, for instance), and even travel (Hawaii tourism exploded because of some of his films).

“When I was a boy, I always saw myself as a hero in comic books and in movies. I grew up believing this dream.”

Elvis, with his bejeweled and flashy white jumpsuits, literally became the star from his beloved comic books. He collected law enforcement agency badges (even from President Richard Nixon), wore police uniforms, carried a gun, learned karate and even had a police force flashlight with him the night of the Jaycee awards. Within months of becoming a singing sensation, at age 21, he was whisked away to Hollywood to become a box office idol in 33 movies.

“When things go wrong, don’t go with them.”

Elvis continually faced rejection, obstacles and criticisms throughout his life. As a young boy his father was sent to prison. Soon his mother and he lost their home. In the 8th grade, his music teacher graded Elvis a “C” in her class. He was turned down after auditioning for an amateur gospel quartet called the Songfellows in 1954. The next year, he was given a thumbs down for TV’s talent show, Arthur Godfrey’s Talent Scouts. Critics, reviewers, evangelists, politicians and entertainers slammed him. Even Ed Sullivan, Frank Sinatra and other show business greats initially cut him down.

What did he do? He didn’t follow the advice of the naysayers and anchor draggers. Elvis forged on by blazing new trails and actually changed the world. Later, he adopted a Taking Care of Business (TCB) lightening symbol to go along with his comic book hero dreams of getting things done in a flash.

“Truth is like the sun. You can shut it out for a time, but it ain’t going away.”

A universal law, full of certainty, reality and actuality, is rolled up into this simple quote. Despite the trials of his extraordinary life of 42 years, Elvis bled the music in the words to many of his songs. Examples? “His truth is marching on…” from “American Trilogy,” and “I did it my way…” from Paul Anka’s tune of the same name.

“Sad thing is, you can still love someone and be wrong for them.”

This 13-word quote is about a profound as any of the words from some of his most tear-jerking love songs. “Heartbreak Hotel,” “I Was the One,” “It Hurts Me,” “I’m so Lonesome I Could Cry,” and “Separate Ways” are just five that come to mind.

60 Inspirational Pictures Quotes That Could Change Your Life

Low Self Esteem Quotes and Sayings with Pictures

Being Alone Quotes and Sayings with Pictures